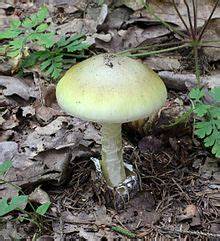 It is a kind of fungus. It is also called mushroom. This species of fungus is a large genus. The fungus of this species is called Amanita exitialis which is a botanical name.

The mushrooms are white and the caps are small to medium. The fins of this fungus tend to look a bit like a lowered ring. On the opposite side of this fungus called mushroom there are four spores Bacidia.

Molecular research is often carried out on these species of fungi. The fungi of this species Amanita exitialis grow in clusters in coniferous forest soils.

These types of fungi come out of the soil. The flesh of the fungus of this species Amanita exitialis is small to medium in size.

The cap is white, bright, convex and wide at about 30-60 mm. The gills of this fungus then become white and crowded, but its short gills are diminishing, abundant, and in about 2-3 positions.

The stem can then grow up to 60 mm and be white, shiny, but sometimes fibrillose squamuls. Also the tops of its stems are elongated and the flesh is white. Then they have a kind of basal bulb in their stem which is about 11-22 mm wide.

This species is DEADLY POISONOUS

fungi amanita-exitialis mushroom poisonous nature writing india
2 months ago by anima0167
W$0.00
Reply 0
Authors get paid when people like you upvote their post.If you enjoyed what you read here, create your account today and start earning FREE WEKU!